The River and the Burial Ground 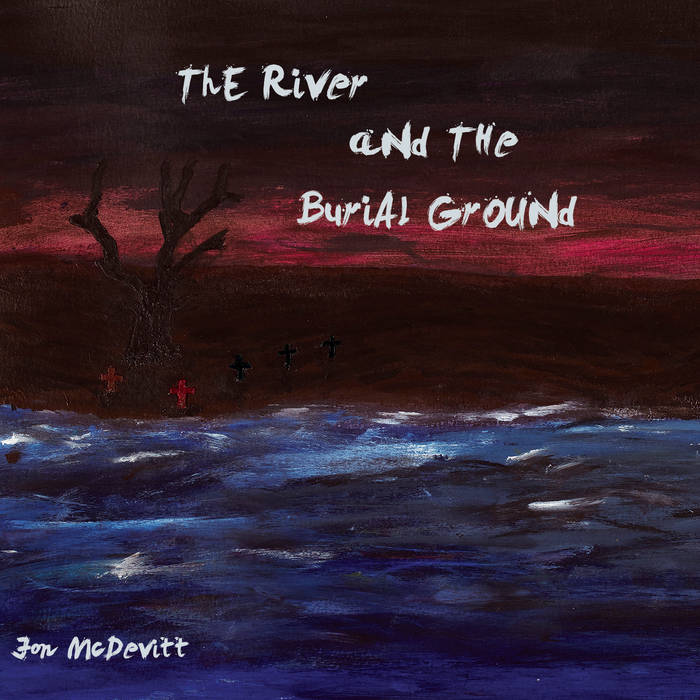 Unapologetically niche, but refuses to be pigeon-holed. One could compile an exhaustive list of bleak yet brilliant icons who might inspire here, but it would do a disservice to the originality and absence of agenda. A veritable pick 'n' mix of styles, none of which seem out of place, and all of which deserve attention. Hints of pastoral Kinks, of Squeeze's lyrical playfulness, some of the acoustic loveliness you might associate with Nick Drake or Paul Simon, and direct, simple, appealingly childlike melodies.  Brit-noir.

Vocals & instruments by Jon McDevitt except

For bio, live dates and all releases, please see www.jonmcdevitt.com

Track Name: Downmarket
We're going downmarket.
Can't go on this way
No blood on the carpet,
nothing left to say

We're going downmarket
Don't know what to say
No matter how dark it got,
we used to somehow laugh it all away

We're going downmarket
I guess things end this way
Don't know how they started
Track Name: For Want of Something Better
We’re all floundering around in our own little towns,
trying to find a little colour, and justify each other
We get a little down, so we tell ourselves we’ve found
a thing that makes us smile, keeps us happy for a while

and I see you striving,
ducking and diving,
trying to find a way to take the pressure off - the smoking only makes you cough.
But you don’t see anything:
you’re wrapped up in requirement, desire and numbers and time...

My life is always governed by the things I’ll never do
It seems to happen often and I never seem to soften
I only want a balance and to keep out of the zoo
it’s a freedom that we crop, never gonna stop

If we could only clear the debts and erase the old regrets
we won’t be up the junction, we’ll maybe even function
All the little gadgets seem to dull and lose their magic
they were better in the window. That’s the funny thing though...

And I see you struggling,
weaving and juggling,
trying to find a way to take the pressure off - the smoking only makes you cough
And you don’t see anything:
you’re wrapped up in requirement, desire and numbers and time

So meet me in the morning, we’ll go drinking we’ll go walking
We can spend the day together maybe run away for ever?
I know I can rely upon the alcohol to lie
about the depth of the nightmare - what the hell do I care?

We'll sit beneath a tree, in a field beside a stream,
have lunch with seven courses and a tenner on the horses,
and when our money’s done, with the setting of the sun
we can get back on the train, go back home again…
Track Name: Half A World Away
I wish it would rain, just to wash away the stench of the market place
and the smile on every grasping face
for a moment that would feel like home...

But it’s useless to complain, as the sun melts the ice in another drink
I guess it’s not the best time to take time to think
Where the water hits the sand,
we don’t need to understand
that everything we might have planned
is slipping like water through our hands...

See our skin is so fair, and the wind that blows through our hair
is so pleasant.
And there’s surely no need to reconcile the past
with the present?
It’s not like we can live for ever anyway
I don’t care what they think I should be
this is half a world away from you and me

Another day, another train, and all of the hope that will break your heart
I wish I had been born brutal from the start,
then I wouldn’t have to hide my eyes

But I must not complain - it’s silly to be sad, because it’s not us
creating all the noise and the fuss
Where the end will surely come,
just as people come undone,
when there’s nowhere left to run,
just turn into the sun and revise your plans.

Still red-faced
a full month later
Who wants the people? Who'll take their hand? Who'll hold them down?
Wash my mouth, you angel
Sweet, pretty angel

All I ever wanted
was to meet my maker
In your Lemon Days, I'm just one of the waifs and strays
Women of occupation (a strip show in every corner of my mind)
Liberation (forty-one to forty-five legs to find)

Are the stars we dreamed of tiny after all?
Track Name: Jasmine
Jasmine, it's time to go now
school is over, out for ever
We're sorry but there's nothing left to learn
Oh Jasmine, every little pain you feel
can grow without you,
we all know about you.
It's time to go
we'll miss you more than you know

Oh Jasmine, your eyes are slow now
you've worked so hard, you're oh so clever
We're sorry but you're just not our concern
Jasmine, why do you have to be so real?
It'd only hurt you,
we'd only desert you
Time to move along,
we'll miss you when you're gone

And it's hard, curse your youth
to define the awful truth
that you crave
That you need
It wasn't you that sowed the seed.

Oh Jasmine, where will you go now?
Further down the road to never
We're sure you'll find another bridge to burn
Live our lives or wind up dead
leave the unsaid things unsaid
It's time to go,
we'll miss you more than you know
Oh Jasmine.
Track Name: Sunburn
The wind and the rain sound in the trees
and end the sadness that no one sees
There's always someone left behind
who knows half of half of what you will find

Could we ever get close to taking one day at a time?
Or will we always be here waiting for the sunshine?
The waves roll out
and the waves roll in,
just for now.

All your sorrows and your joys
are dust in the wind to the older girls and boys
And if it comes down to a kiss,
in all the world, there's no perfection like this

Could we ever get close to taking one day at a time?
Or will we always be here waiting for the sunshine?
The waves roll out
and the waves roll in,
just for now,
until they're gone again

Happiness finds its own way

Ships in the distance carry dreams,
but everything is just the way that it seems
Until you dream a little harder
Then maybe, just maybe...

Could we ever get close to taking one day at a time?
Or will we always be here waiting for the sunshine?
The days roll out
and the days roll in,
just for now,
until they're gone again

Happiness finds its own way.
Track Name: May
The blood ran.
You said you felt dirty
Seems funny killing something when it's new
But if anybody ever could be blamed
when it hurts, or something,
and you flirt, or something,
then it's worse, or something
Then it's you

Someone said that someone said the truth will set you free,
and I don't know if that's true, but it got you away from me
The problem is it only gives you one way to be and that's where you fall

Around your life
the shadows rise and fall
nobody knows it all
The tumbling trajectory
suggests an intersect with me
We pass and gesture desperately,
'You've not had the best of me'
Satellite...
Satellite...

Around your life
somebody knows
Track Name: In The Late Hours
In the late hours
sleep keeps slipping away
Wait for the dawn, bird-song
Wait for the new day

In the late hours,
you can catch your breath... Catch a star
Catch a dream passing

In the late hours,
there’s not enough space in your head
for all your hopes and fears, and all of their hopes and dreams

My mouth it will not speak
Everything’s collapsing
Everything feels weak
Everything's collapsing
There are hopes that lie in tatters,
it’s true that the fragile shatters,
and I can’t believe how much it matters

In the dying of the light,
at the onset of the lonely night
I wish it weren’t this way,
and I can’t believe I don’t know what to say

In the late hours

Bandcamp Daily  your guide to the world of Bandcamp